Sisterhood "Saint Xeni"
Diacony for the Release of Poor and Prisoners 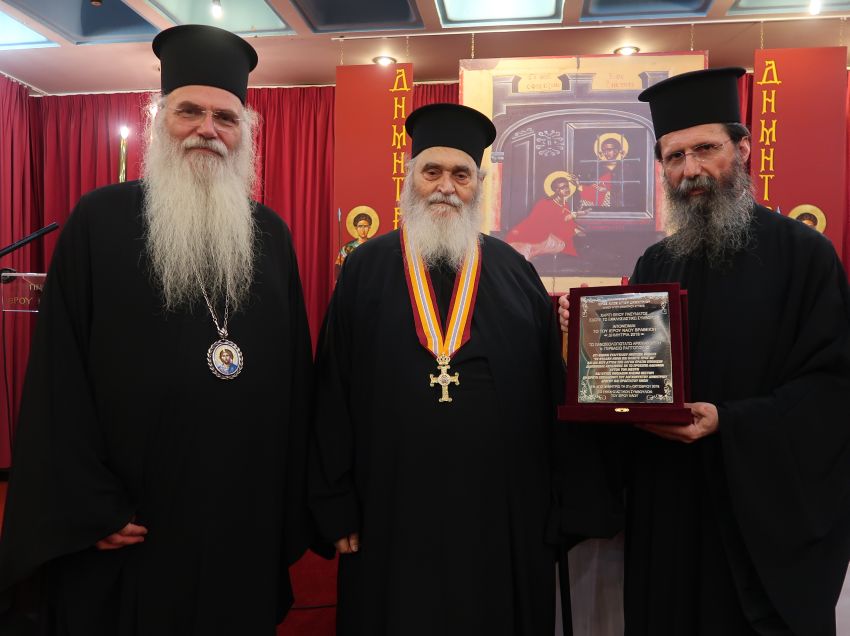 In this Sunday, Feb. 2, 2014 Father Gervasios holds up a letter, in Arabic, copies of which are handed out to all prisoners his charity frees, in their own language, explaining why they receive the help in the northern port city of Thessaloniki. The soft-spoken 83-year-old with a long white beard and black robes has helped more than 15,000 convicts secure their freedom over nearly four decades, according to records kept by his charity. The Greek rules apply only to people convicted of offences that carry a maximum five-year sentence, such as petty fraud, bodily harm, weapons possession, illegal logging, resisting arrest and minor drugs offences. (AP Photo/Nikolas Giakoumidis)

THESSALONIKI, Greece (AP) — Germany made headlines this week by letting Bernie Ecclestone, the Formula One chief, pay $100 million to end his bribery trial. In Greek justice, money talks in a different way: Some inmates jailed for minor offences are allowed to buy their freedom — at an average rate of five euros per day.

With the rich at a clear advantage, Greek Orthodox priest Gervasios Raptopoulos has devoted his life to paying off the prison terms of penniless inmates.

The soft-spoken 83-year-old with a long white beard and black robes has helped more than 15,000 convicts secure their freedom over nearly four decades, according to records kept by his charity. The Greek rules apply only to people convicted of offences that carry a maximum five-year sentence, such as petty fraud, bodily harm, weapons possession, illegal logging, resisting arrest and minor drugs offences.

His work, however, is getting harder.

Gervasios, 83, has seen his charity's funds, which all come from private donations, plummet in Greece's financial crisis. And there has been a sharp rise in inmates who can't afford to pay their way out of prison.

The crisis, which has worsened already hellish prison conditions, makes his efforts even more pressing.

"Our society rejects inmates and pushes them into the margins," he said. "People often say: 'It serves them right.'"

While behind bars, inmates also need money to buy necessities such as toilet paper and soap when the often meagre supplies provided by prison run out. Gervasios helps them, too, either with cash or handouts.

Greece has a prison population of about 13,000 — far above capacity — forcing authorities to cram inmates into police holding cells as they wait for a place in jail.

Gervasios' charity allocates up to 500 euros ($675) for each prisoner they help, but the amount needed varies.

"Once, we gave a man 8.5 euros, which was what he lacked to gain his freedom," he said.

Based in a village outside the northern Greek city of Thessaloniki, Gervasios says he has visited prisons in some 90 countries — including Madagascar, Australia, Russia, Albania, Israel, Egypt, and New Zealand — trying to secure the release of Greek prisoners there.

Gervasios lives with a group of nuns who are the backbone of his charity. He is now officially retired from the priesthood — allowing him to travel regularly to all of Greece's 34 penitentiaries. He tours about once a month to hand out gift bags with clothing, a religious icon and toiletry items such as shaving materials, soap, shampoo and toothpaste.

Many prisoners released by his efforts in Greece are foreigners. If they die in prison, the charity pays for their bodies to be taken home.

Since launching the charity in 1978, Father Gervasios has received several state awards, including one of the highest civilian honors granted by the government. The Justice Ministry, responsible for Greece's prisons, is unstinting in its praise.

It is inmates and prison staff who are the most grateful.

"We would send him papers concerning prisoners who could be freed with a cash payment, and details on what they were in prison for," said Costas Kapandais, a former governor at Greece's Komotini and Diavata prisons. "He didn't turn down a single request."

Former inmates frequently turn up at the charity headquarters on the outskirts of Playiari, a village some 25 kilometers (15 miles) from Thessaloniki. Some repay the money they received. Other, still in need of help, receive food handouts.

"I went to prison because I was selling bread rings without a license," said 60-year-old ex-inmate Dimitris Germanidis. "He paid the fine, and bought off my sentence and so I walked free. ... He helped without knowing me, he didn't even know who the money was going to."

Thomas Kotopoulis, 66, said Father Gervasios stepped in to save him from jail when all seemed lost.

"A fine had been issued against me," he said. "Every day, the police would come to my home and say that, if I couldn't raise the money I would go to jail. On the very last day, Gervasios came to help. It's like he descended from heaven.

Copyright 2014 The Associated Press. All rights reserved. This material may not be published, broadcast, rewritten or redistributed.

The Rev. Gervasios Raptopoulos from Greece visited the below mentioned prisons in Russia:

The Rev. Gervasios Raptopoulos from Greece visited the below mentioned prisons in Russia:

TheRev. Gervasios Raptopoulos with his partners visited the above mentioned prisons giving a lot of presents to the prisoners (tracksuits, socks, gloves, towels, e.t.c.).

On the other hand, he had been participating for 3 years by a Paper in the International Congress of the Patriarchate of Moscow, which is held annually, from 24th to 29th January.

He also released on bail a young Russian prisoner from a Moscow prison by sending € 1.450,00 from Greece.

The "Diaconate for the Release of Poor Prisoners " of the "SAINT XENI" Orthodox Missionary Sisterhood was founded in 1978. It has carried out this humanitarian and Christian diaconal service until the present, and it will continue to do so in the future.

The coordinator of the "Diacony for the Release of Poor Prisoners " of the "SAINT XENI" Orthodox Missionary Sisterhood is the spiritual advisor to the Sisterhood, the Very Reverent Archimandrite Gervasios Ioannis Raptopoulos, Preacher, who signs o­n behalf of the Missionary Sisterhood the letters addressed to the released poor prisoners and defendants and any relevant document.

The information instrument of the "Diacony for the Release of Poor Prisoners " is the quarterly orthodox periodical "Christian Pulses".

Make your donation via Paypal